Over the past two weeks, I have had the opportunity to participate in two volunteer events with Now I Lay Me Down to Sleep, an organization that provides services to families who have lost babies. Both of these opportunities took place right around the time of Micah’s 3rd birthday in heaven, and I felt that being involved was another way to honor the short life of my baby.

While I’ve participated in these events before, this time was different. Instead of crying for my baby, and myself, the tears started flowing as I listened to other loss moms speak about their babies, many of them newer to the loss journey than me. I watched the tears and sorrow consume their entire bodies, making it impossible for them to even speak their child’s name. That’s not to say that my eyes remained dry as I spoke my baby’s name, but the stories of others seemed to affect me more than my own story.

I cried with and for those moms. I have walked in their shoes, the shoes that are deeply embedded into the cement of grief, making it impossible to escape. I cried for their babies. The babies who are now buried beneath the cement; the babies whose lives remain invisible. And I cried as I remembered stepping into those same shoes for the first time, three years ago. I remembered the paralyzing emotional pain. I remembered wanting desperately to escape, my feet unable to move. I remember thinking that life had stopped. And I remember thinking that it would never start again. Three years seems to have passed in both an instant and an eternity.

As I listened to the stories and watched the tears of the newly bereaved flow, I wondered if time has caused my grief to become less valid than theirs; if my experience and my baby have lost significance over the course of the years. And I felt my own insecurities about my personal loss experience creep back in.

Many, not all, of the others who joined in on these events, experienced full-term losses. Many of them lost babies at 36, 38, and 40 weeks pregnant. Some had lost babies who were a few days old. They were able to refer to their baby as being a son or a daughter. I lost my baby at 20 weeks. And even though I saw and held Micah, I cannot say whether it was a son or a daughter who lay in my arms. And three years later, these facts can still make me feel like Micah’s life is of less significance than the baby who died at full term, or the baby who can be described as a boy or girl. 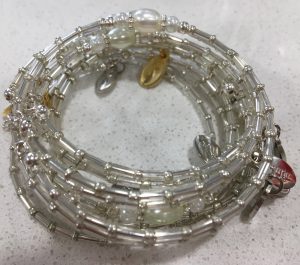 But as I made bracelets for loss mamas and put together care packages for those next in the endless line of loss, some of my insecurities began to diminish. I watched other volunteers, ranging in age from 15 to 75. Each one with a purpose. Each one filling an important role. Each one leaving a mark on the world in some capacity. A life is a life. Is the life of a 5 year old any less significant than the life of a 95 year old? Absolutely not. So the loss of a baby at 20 weeks gestation (or earlier) is no less significant than the loss of a baby at 40 weeks gestation. Different, sure. But no less important. They were all made for a purpose. They were all known by the people who loved them. And they are all missed by those same people.

As I watched and listened to those around me, especially the other loss moms, I couldn’t help but think of the women who will unfortunately be following in our footsteps. The women who will be receiving these packages under the most tragic circumstances. How strange it was to be planning for death. To be planning for the doomed fate of another before they find it out for themselves.

We assembled over 200 care packages, for 200 women and their families, who will leave the hospital without the baby they had planned to bring home. As I prepared and packaged books and journals, teddy bears and blankets, I thought of those women who will be receiving them. I thought of the women who do not yet know that they will lose a baby. The women who do not yet know that these small and seemingly insignificant items will be the only keepsakes from their baby’s short life. The women whose lives will change in an instant when they realize that their baby will not live. The women who have yet to feel the bone crushing grief of pregnancy loss. And I shed a few tears for them as well.

The experience was bittersweet. Sweet to be honoring the lives of babies, lives that generally don’t receive much honor. Sweet to be caring for other loss moms, who are so often overlooked. And yet bitter to know that this gathering came about as both the result and anticipation of suffering.

It was a look into the past, my past, as I reflected on those early days of loss and that first year of grief. The days where my body was consumed by grief and sorrow.

It was the reality of the present, a time in which so many loss moms are in the darkest days of grief. When emotions are raw and unable to be contained.

It was a glimpse into the future, a future that will most certainly include pregnancy loss, and the death of babies. A future that holds indescribable sadness.

But it was also an experience that produced hope. Hope that with each passing year, more loss moms will be able to move out of the darkest days of grief with the help of others who have come before them. And with the help of organizations like Now I Lay Me Down to Sleep that provide ears to listen, words to read, and reminders of a baby’s life that can be seen and held. There is hope in knowing that women don’t have to walk through pregnancy loss alone and that we are all united, walking together through the devastation.

Subscribe to Jenny's newsletter for hope and encouragement right to your email inbox.

The pressure of the Christmas season is ON. We are

It’s phrases like this that will forever make me

Years ago, when I was steeped in grief and despera

Please, go ahead, be merry and bright. But please